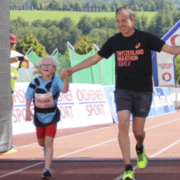 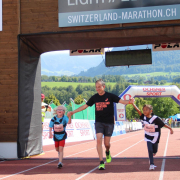 Since 2014, Viktor Röthlin, European Champion of the Marathon in Barcelona 2010, has been organizing the „Switzerland Marathon light“ in Sarnen, Switzerland. This year the competition „Beat Vik“ was launched.

The concept: Viktor Röthlin starts time-staggered to other participants and rolls-up the field from behind. Winners are those participants he doesn’t overtake.

This year, iRewind provided two video innovations. On the one hand, iRewind produced 2’170 finisher videos with its own video cloud product iRewind. Since publishing the finisher videos on the organizer’s website more than 5’000 videos have been watched within a short time; around 40% of these were distributed on mobile devices.

The latest feature: iRewind can also be shared via WhatsApp, which overtook Facebook and Twitter as sharing option.

iRewind also provided a world first: a complete semi-marathon was produced as a Virtual Reality (VR) video. Why is this exciting? The VR-Cam („Isostar-Cam“) accompanied Viktor Röthlin during his entire race. This allowed the participants to review the race and analyze the moment when they were overtaken by Viktor Röthlin. The VR video was published on YouTube and embedded on the organizer’s website, including the finisher clips.